The Power of Men’s Love 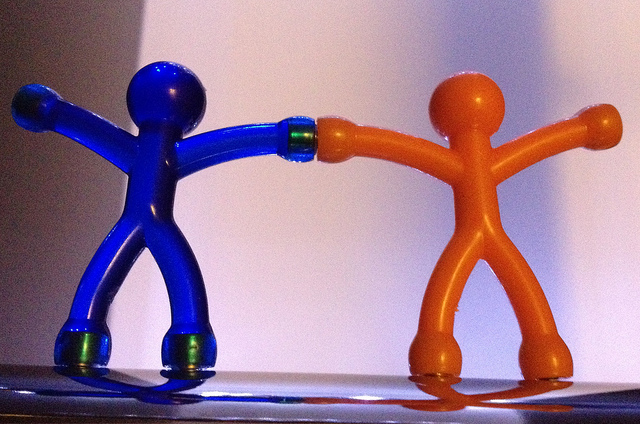 This year we found out Michael Sam is gay. Big deal. As Dallas sportscaster Dale Hansen pointed out, if the NFL and its product isn’t harmed by having men who abuse their female partners, men who use illegal drugs, and men who are accused of murder—and that’s just the Cowboys—how could a guy who is openly gay be a problem?

I think the real issue here is that men’s love scares us. It’s incredibly powerful and as a culture, we don’t know how to respond to that power.

Westley bested a Giant, outfought the Spaniard, and braved Rodents of Unusual Size in order to be with Buttercup. Menelaus’ love for Helen drove the Trojan War. Superman reversed the flow of time to save Lois Lane.

That’s how important and powerful men’s romantic love is.

Love gives men many things. And men give love.

Yet we often downplay it. We insist that guys are primarily interested in getting laid and suffer through relationships because that’s the requirement for having sex. But the notion that men are simply roving inseminators doesn’t accurately reflect our evolutionary history.

The reality is that guys choose to be in relationships. That’s why approximately 90% of American men get married or why between 50% and 60% of high school boys, college guys, and non-college dudes age 18-25 are in relationships at any given time.

Peter Klave said “I Love You, Man” to Sydney. Michael Scofield went to jail to arrange a Prison Break for his brother Lincoln Burrows. Samwise Gamgee followed Frodo Baggins across Middle Earth and carried him the last 500 feet up Mount Doom.

We often imagine male-male friendship as consisting entirely of shared activities, horseplay, joking around, and doing outrageous things. That’s certainly the standard portrayal on TV and in film, giving rise to movies like The Hangover and its senior edition, Last Vegas.

What’s with the sexual angle inherent in terms like “bromance” and “mancrush”? Is this American culture using homophobia to discourage male-male friendship?

A guys tells his friend “I’ve got your back” when he wants him to know they’re protected and supported. He may even tell a guy that he’s a brother, a member of the family. That’s the guy—or the guys—he’ll reach out to when he needs to talk about what’s important to him, what he’s worried about, and how he feels. But American culture teaches guys to do that privately because they shouldn’t show feelings or weaknesses, including fears.

We can’t deal, which is probably why we teach guys to hide their male-male friendships and treat them like deep secrets. Our culture has started to use terms like Bromance and ManCrush to describe men’s friendships, but what’s with the sexual angle inherent in those terms? Is this our culture using homophobia to discourage male-male friendship?

Deadalus built wings for his son Icarus to fly out of Crete, but lost him when Icarus flew too close to the sun. This guy built his son an ice-cream truck Halloween costume. Fathers literally throwing themselves into danger in order to save their kids is a common image; on the big screen, that’s Bryan Mills (Liam Neeson) after his daughter was Taken.

Many men say their proudest moments and their biggest accomplishments in life are related to being a dad. Even announcing a (wanted) pregnancy is often a point of pride. That moment, and the pregnancy related anticipation, prompt men to think broadly about their lives, something we rarely encourage them to do. It’s often a profound moment.

Many men say their proudest moments and their biggest accomplishments in life are related to being a dad.

In order to provide for their families, generations of American men sacrificed their bodies working in mills, mines, and assembly lines. The work was physically demanding, somewhat dangerous, and rarely provided any rewards or satisfaction beyond a paycheck. Sure, it looks exciting and the guys on “reality” shows like Deadliest Catch and Ice Road Truckers say they love it, but they’re also the guys who have chosen to be on TV. How many guys do it because it’s the best paying job they can get and fear that this trip will end in death?

I think that men’s love scares Americans. We know its power, even if we don’t think about it too much. Our political leaders tap into it as love of country whenever they want to get us riled up about an issue, and especially when they want us to go to war.

We try to ignore it by saying men just want sex, diminish male friendship by calling it bromance, and treating fathers as though they don’t count.

Love gives men many things. And men give love.

Hmmm, maybe the NFL should be worried about openly gay players. Michael Sam was the best defensive player in what was arguably the best college football conference in the country. Imagine what he might do on the field using the power of love.